WASHINGTON, D.C. – On Dec. 1, 2021, the street west of the U.S. Supreme Court was filled with thousands of people sporting bullhorns, protest signs, and competing, color-coded shirts proclaiming either their support for, or opposition to, abortion.

Police officers lined the steps of the Court, set up barriers, and roamed the crowds in brightly emblazoned yellow vests. Some escorted bomb-detecting dogs through the crowd at regular intervals. Others stood atop nearby rooftops, watching the conflict with binoculars and radios.

The Supreme Court was hearing oral arguments in a case that could overturn Roe v. Wade, seismically shifting how abortion is legislated in America, and emotions were at a fevered pitch.

But on the south side of the white marbled building, a very different crowd had assembled. A smaller crowd. A quieter crowd.

With gentle praise music playing, hands raised in prayer, hailing from many denominations and many states as far away as California, these pro-life advocates invited any and all to join them, asking only that newcomers set aside their protest signs and join in the prayer.

Though smaller in number than the crowds to the west, the prayer warriors’ impact could not and should not be underestimated. Their weapons were fashioned not from cardboard and paint, but from faith in the words of Ephesians 6: “For our struggle is not against flesh and blood, but against … the spiritual forces of evil in the heavenly realms.”

Very human Supreme Court justices may represent the apex of the abortion battle, but these prayer warriors recognize that a court decision that has led to the slaughter of over 62 million innocent children won’t be overturned without a fight, and without a victory, in the spiritual realm.

“I appreciate all the supporters in the rally crowds over there,” observed The FAMiLY Leader’s Drew Zahn when he encountered the prayer gathering, “but if we’re honest, it’s the crowd over here that is actually accomplishing the most today.”

The prayer gathering on the south side of the Supreme Court, however, represented only a small sliver of those who have been in prayer for America to repent from abortion.

Careful observation of even the crowd on the west revealed many people sporting their message on their T-shirts … but lifting their hearts in prayer.

TFL encountered one woman from Philadelphia who sat at the back of the crowd with her husband, her lips moving silently in prayer.

“We’ve been coming here for decades,” the woman later relayed. “Returning again and again to this same place, praying for life.”

And in churches and families and homes in America – and even across from abortion clinics themselves – the prayers have been raised for decades: for life, for repentance, for healing for the women who have suffered because of abortion’s lies, and for revival in our land. 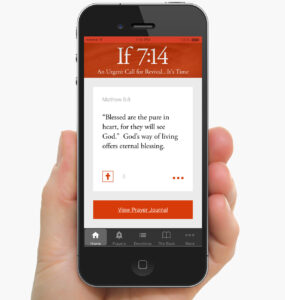 The FAMiLY Leader’s If 7:14 prayer ministry has also joined the prayer for life. Since June, If 7:14 – which unites thousands around the world through a free phone app that alerts people to pray twice daily for revival – has been devoting one prayer alert each week leading up to this very day at the U.S. Supreme Court.

“Ask for God to divinely intervene to change our laws to affirm the value of preborn life,” read one of If 7:14’s twice-daily prayer alerts. “Pray, fast, and be informed concerning the U.S. Supreme Court case, Dobbs v. Jackson Women’s Health Organization, and ask for God’s people to move in action as they appeal to God for life.”

“Give thanks and intercede for ministries and organizations who have the gift of mercy and show compassion to those who cannot speak for themselves,” read another alert. “Pray that their love for life will save babies from abortion and minister to their mothers through tangible means of help and service.”

Join the If 7:14 global rhythm of prayer for revival. Download the free phone app today!

The need for prayer in this critical Supreme Court case, however, continues. Though the justices heard the arguments and privately filed their initial vote on the case on Dec. 1, they have until the official decision is released (most likely in summer of 2022) to amend their ruling or even change their mind.

“We know from [1992’s Casey ruling on abortion], that one justice, Anthony Kennedy, changed his mind and his vote several weeks in,” explained TFL Vice President and Chief Legal Counsel Chuck Hurley from D.C., “and that created 30 million more abortions in this country. That one vote. So it’s important that we continue to pray.”

Read more and watch videos from TFL’s coverage from the steps of the U.S. Supreme Court here …