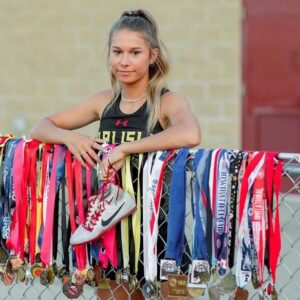 My name is Ainsley Erzen, and I’m writing to you concerning comments in the Cedar Rapids Gazette that the union needs guidance regarding transgender athletes in sports.

This summer, I won the girls 800-meter high school national championship in track, and broke the Iowa state record. It was such an honor to represent my state as the first Iowa female high school runner to win a national track title, and so humbling to have my name listed among such talented women as Shelby Houlihan and Joy Ripslinger. I believe this is a prime example of some of my most core beliefs: that if you work hard and put your faith in the Lord, He can, and will, accomplish things within you that you could never even dream of on your own.

That being said, my time of 2:06.52, the time that made me the fastest Iowa high school female 800 runner of all time, the time that earned me the title of national champion, was easily beat by 85 high school boys at the 2021 Iowa high school state track meet alone. Eighty-five. Just in our small state of Iowa. The results of the 2021 Drake Relays proved to be no different, as the last male runner came through the line in a time of 2:03. That same year, a time of 2:13 was enough to make me the 800-meter Drake champion. The slowest boy was easily 10 seconds faster than the first-place girl. But I don’t need to explain this to you. Iowa track officials already know there are huge biological differences between boys and girls. Why else would the 2021 girls blue standard (the automatic qualifying time for the Drake Relays) have been 2:16, while the boys was set 20 seconds faster, at 1:56?

These numbers should end any dispute. There is no explanation for the performance gap except for biological differences. Iowa athletic unions already have all these numbers. In fact, it’s on their own websites that I was able to find them myself. But here we are, with the IGHSAU, which exists to protect girls sports, asking for advice. So I’ll go on.

Agree with Ainsley? Tell YOUR legislator to stand with her and #SaveGirlsSports in Iowa!

Need some examples outside of track and field?

Serena Williams is arguably the best female athlete of all time in any sport, but when questioned on how she would feel about taking on her male counterparts, her answer was brutally honest. “Men’s tennis and women’s tennis are almost two different sports. … If I were to play Andy Murray, I would lose, 6-0, in five to six minutes, maybe 10 minutes. The men are a lot faster, they serve harder, they hit harder. … I love to play women’s tennis and I only want to play girls because I don’t want to be embarrassed.” This from the greatest female tennis player of all time. At least Williams gets it.

Let’s take a look at the U.S. women’s national soccer team. In 2017, the USWNT, the most decorated team in the world, with four Olympic gold medals and four World Cup championship titles, played a boys’ under-15 FC Dallas team to prepare for a game against Russia. The result? A 5-2 win for the group of 14- and 15-year-old boys. A loss for the best group of women in the world.

I’m not saying any of this to invalidate other female athletes. In fact, my intentions are the opposite. Throughout my life, I’ve played multiple sports and met a countless number of amazing girls. Determined, hard-working girls with huge goals and big dreams for the future. Girls who put their faith in God, and trust that He will reward their efforts. Girls who rely on people like you at the IGHSAU to protect the sports they love, and the things they aspire to achieve. If you try to ignore biological differences, I guarantee there will be nothing left of women’s sports. There will be no Sydney McLaughlins, no Serena Williamses, no Julie Ertzs, and no Abby Wambachs.

So here I am writing to you, explaining why female sports need to be protected and preserved. But, in all honesty, I shouldn’t have to. The Iowa Girls High School Athletic Union was created to protect the rights and best interests of female athletes. Don’t just stand by and let what’s happening in other places happen here. Don’t force more girls like Selina Soule, a female high school runner in Connecticut, to have to defend her rights alone as her athletic union lets athletes with an unfair advantage climb into the blocks next to her. Stop asking others to do your job for you, and be bold enough and brave enough to stand up for the hundreds of girls who rely on you to be able to continue to do what they love. We’re counting on you.

Ainsley Erzen is a senior at Carlisle High School.

Agree with Ainsley? Tell YOUR legislator to stand with her and #SaveGirlsSports in Iowa!