When the Iowa House of Representatives asked for public input on the Protect Life Amendment, nearly 1,000 comments came pouring in: with an overwhelming 2-to-1 tally in favor of the amendment. Lawmakers requested online comments prior to a Jan. 19, 2021, House Judiciary subcommittee meeting to determine whether the proposed amendment to the Iowa State Constitution should move forward. “Thank you for making the Protect Life Amendment a priority!” wrote Colleen Allen, in one of 632 comments submitted in favor, compared to 315 opposed, tallied at the time of the meeting. “I greatly appreciate you giving us an opportunity to speak when judges overreach and attempt to rewrite our Constitution. Thank you for working to protect mothers and the lives of their babies from efforts to expand abortion, even to the day of a baby’s birth, and even making Iowans pay for it. I urge you to pass the best possible Protect Life Amendment, because that child in his or her mother’s womb is a baby – a person, who has the right to live.” 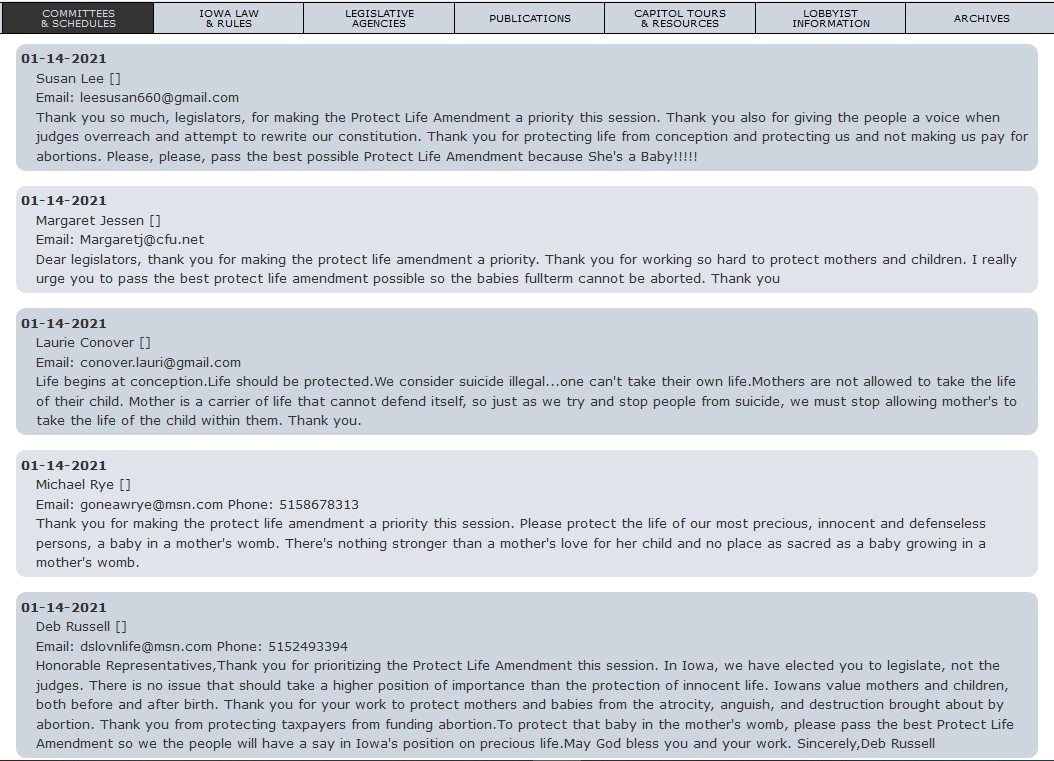 View ALL the public comments that have been submitted here.

The proposed Protect Life Amendment, filed in the Iowa House as HF 41, was drafted in response to a 2018 decision by the Iowa Supreme Court that declared abortion a “fundamental right” that can only be restricted under the court’s “strict scrutiny” standard. Far more radical than even the infamous Roe v. Wade decision, Iowa’s 2018 ruling potentially paves the way for elective abortions all the way to the day of a baby’s birth and even compelling Iowa taxpayers to pay for them. The Protect Life Amendment, on the other hand, if passed by two consecutive legislative assemblies and ratified by a vote of the people, would effectively overturn the Court’s 2018 decision by declaring there is no such “fundamental right” in Iowa’s Constitution. “The Protect Life Amendment really does put the Constitution back in the hands of We the People,” explained Chuck Hurley, vice president and chief legal counsel for The FAMiLY Leader, which supports the amendment. “Unelected judges effectively added a new ‘right’ to the Constitution that could make Iowa one of the most pro-abortion states in the country – without even a vote of the people! The Protect Life Amendment, however, would once again allow the people of Iowa – and not extremist judges – to determine reasonable abortion regulations that actually protect women and children.” The FAMiLY Leader, or TFL, is one of several pro-life organizations that work in cooperation through Iowa’s Coalition of Pro-Life Leaders to protect and defend the sanctity of human life. Both the Coalition and pro-abortion advocates (like Planned Parenthood) initially rallied supporters to submit comments prior to the Jan. 19 House subcommittee hearing. TFL, for example, drafted social media posts and an email alert that was adapted and multiplied across several Coalition members’ support networks. TFL also alerted its “Pro-Life Rapid Response Team,” a network of dedicated advocates who receive periodic texts when urgent pro-life news breaks in Iowa. “The FAMiLY Leader’s team at the Capitol is incredibly grateful for the Iowans who are willing to stand up and make their voices heard when babies’ lives are on the line,” Hurley commented. “And we’ve already seen multiple instances of the Rapid Response Team in particular springing into action when lawmakers urgently need to hear from pro-life Iowans. Tuesday’s 2-to-1 flood of pro-life public comments was just another example of the difference you are making in the fight for life.” Join the Pro-Life Rapid Response Team that is making a difference today! Click here now.
Categories
Archives
≡