Registration is NOW OPEN for this year’s LEAD Summer program scheduled for July 24-29, 2022.

Download the registration form below, fill it out, and return to TFL by mail or, more conveniently, by emailing it to rebekah@thefamilyleader.com.

A WEEK-LONG SUMMER LEADERSHIP EXPERIENCE THAT EMPOWERS TEENS TO CHANGE THEIR WORLD.

…Not your typical summer camp

At LEAD, we believe the best time to start being a leader is now, and the best way to learn is to do it. That’s why we run authentic leadership simulations where high school students have the opportunity to experience the roles of community leaders first-hand, making decisions that would affect millions of people as a state legislator. Mix that in with engaging biblical worldview discussions, faith-building worship and chapel, a hearty dose of games and recreational activities, and awesome relationships built throughout the week, and you’ve got a pretty good idea of what LEAD looks like.

WHAT DOES LEAD STAND FOR?

Learn to live out your faith in the real world.

Be Empowered to fulfill God’s purpose.

LEAD is a week-long leadership experience in Des Moines, Iowa where teenagers find themselves in the middle of the action, role-playing as legislators and members of the media. These experiences are as real as it gets! 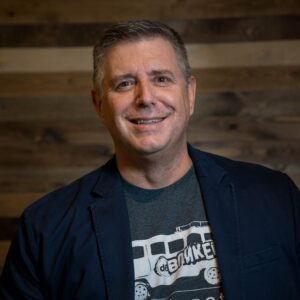 Carl Kerby of Reasons for Hope was first introduced to apologetics by two pilots after he’d told them evolution was compatible with the Bible, which is what he’d been taught in Sunday school. These men pulled out their Bible and showed him that what the WORLD taught wasn’t the same as what the WORD taught. With 50% to 88% of the younger generation raised in the church leaving the church by the age of 18, Carl’s desire is for them to KNOW what they’re walking away from. This can only happen if they’re able to critically think and evaluate arguments so they can determine truth.

Carl would say he doesn’t enjoy speaking, at times he’s terrified of it. However, seeing people get excited because they realize they can trust the Word of God inspires him to continue on. When he’s not speaking, Carl loves being with his family and friends. He also enjoys the ocean – snorkeling, boogie boarding, or fishing. Carl has two honorary doctorates and a degree in Biblical Studies. However, his most important credentials would be SSBGTFIC – (Sinner Saved By Grace Through Faith In Christ) and husband/father and grandfather.

Students role-play as state representatives, debating real bills from the Iowa Legislature. The simulation culminates with a session in the Iowa State Capitol Building. This track is open to all students. First year students are required to participate in the House track.

Returning students build on their experience in the House Track with this exciting Senate simulation. They can amend their bills, contribute to media coverage of the House, and help lead the House Floor Session. The Senate track is open to students who have completed the House track.

Media students play a key role at camp as part of the LEAD News Network team, producing a newscast and a daily newspaper. Students will gain both print and broadcast media experience through this challenging and rewarding track. The Media track is open to students who have completed the House track.

And while gaining invaluable experience, students engage in biblical worldview discussions, faith-building worship and chapel, a hearty dose of games and recreational activities and awesome relationships built throughout the week.

LEAD IS AN EXPERIENCE YOU
WON’T WANT TO MISS!

If you are interested in this exciting opportunity, please contact TFL’s Rebekah Oleson at rebekah@thefamilyleader.com to learn more.

Facilitated by?
The leadership team of The FAMiLY LEADER.

Who?
Teens entering 9th grade to those who have just
finished 12th grade.